(Note: I can say Ching Chong cos I’m Ching Chong.  If you have only the Ching or the Chong or neither, say it only if you like cigarette face burns & 3 fingers left on each hand in the morning.  Ahhh the beauty of controversial racially inappropriate double standards – I’m onto it) 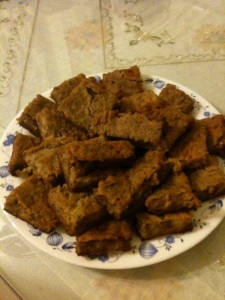 My dad baked a cake by mixing banana & tasty cheddar cheese together.  He argued it was ‘cheesecake’ even though he used cheese meant for pizza.  I was forced to eat it and then I gagged – not in a nightclub laneway ‘well I should keep on going cos the guy at the bar bought me a drink’ kind of way.  But more in a ‘this is what a banana with a bacterial yeast infection tastes like’ kind of way. He might be trying to get this on the menu at Lucky Duck Chinese Restaurant.  Keep on walking.

My dad plays ping pong every Sunday.  He wears these shoes to Ping the Pong.  I think my dad’s in a gang.  And bright orange is their Wu Wong Tang gang bang colour.  I need to look for chopsticks with p.i.m.p inscribed on the side with fake diamonds and hoes hiding in the rice storage bin to be sure.  Meanwhile everyone beware.  If you see and smell a Honda that’s using toilet freshener as car fragrance slowing rolling up beside you on the road – don’t try & be a hero when that ping pong bat points at you through the back window.

Dad bought this turbo massage chair.  It’s compliance with health and safety standards is as questionable as the place of birth stated on his Australian passport.  Sit in this chair for 20 minutes with the vibration settings on high and you’ll be circumcised – yes that includes you too ladies.  It’s here to stay so I’ve decided I must de-sensitise myself to its power.  To do this I will lay on it nightly … naked … face down …with a glass of wine … until it’s safe … hey don’t hate the player people, hate the manufacturer…

Dad installed this satellite on the roof.  Communist Terrorist – Maybe.  Gangster – Definitely.  Check out the puffer vests below – rocked only by those feared in the hoods cos mum & dad are nothing but pure bad ass Chup-Bowl: 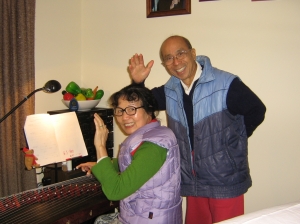